All The Stars Are Suns - Imaginative Hard Sci-Fi

Sincerity Espinoza didn't go looking for trouble, it found her. All she wants out of life is the chance to go to the stars but she is caught in a web of misunderstandings, political & legal maneuvering, and the growing threat of terrorist plots by religious fanatics. She has a secret that if found out too soon could mean not only her own death but the ruin of the hope for humanity ever going to the stars. But even amidst momentous events, life is still about the small moments of love, laughter, and sadness.

The image below includes alt-text. 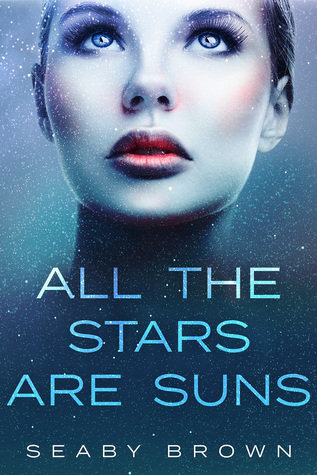 There are a lot of characters in the book, and the cast is diverse. They come from different countries and backgrounds, they believe in different things, some of them are fanatics, one of them is neurodivergent. There are some LGBTQ+ characters, including a successful trans woman who hosts her own show. There are also 'synthetic intelligences' - basically artificial brains that are given remote avatars (i.e. bodies) to operate. However, none of the characters felt like a protagonist, they were all more like secondary characters supporting the plot, and none of them was particularly fleshed out.

There is a great deal of world-building in the book, especially when it comes to technology. The 'science' part of the fiction is really strong, and it looks like the author knows what she's talking about. You'll get a detailed description of how everything works and dive into subjects like genetic engineering, space travel and AI. In the future the author portrays, the world is even more interconnected and globalist, languages and cultures are mixed, most of the population live on Universal Basic Income, as most jobs are automated. The author portrays different forces at play, each with their distinct views and agenda, trying to achieve their contradictory goals.

The plot is clear. We follow the characters over the years as each of them tries to reach their goals. Even though there are some personal events happening in some of the characters' lives, they are mostly just shown doing their jobs or dealing with the situations related to the story. We don't get to know them or their motivations well.

The book is full of thought-provoking ideas regarding technology and the possible future of humanity. It raises a lot of interesting questions. How would it influence people if the majority of the population lived on Universal Basic Income? What can we do to ensure that people still have an active role in their communities? What is the value of art? What is the difference between synthetic and organic intelligence when technology reaches a certain level? How can humans reach the stars taking into account the actual limitations imposed by the laws of physics? How can extreme views impede progress? These ideas gave me food for thought and entertained me.

However, I had trouble connecting with any of the characters. The author has a unique style: each chapter switches between different characters after a few paragraphs. Taking into account how many characters there are, it was hard for me to follow, especially in the beginning, when I didn't know anything about them. It became easier later, but it still prevented me from immersing in the world and living through the events with the characters or getting to know them better. To me personally, even though the events in the book were exciting, and the stakes were high, the story lacked emotional tension. Nevertheless, I enjoyed the story that was mostly based on ideas.

You might enjoy the book if you are into hard sci-fi and are interested in AI, space colonization and genetic engineering, want to know the real science behind concepts and don't mind a book being mostly about ideas, with characters playing a secondary role.

You can get the book on Amazon.

Check out my interview with the author, where she discusses AI, synthetic brains, automation, Universal Basic Income and more!

Seaby Brown is an internationally recognized leader, entrepreneur, executive, and technologist / inventor in the flat panel display and microelectronic industries. She is a regularly invited speaker at international conferences, industry symposia, and universities. She has held engineering and managerial posts in leading semiconductor firms as well as start-up ventures. She has founded several technology companies and led industry research consortia programs. Seaby has over a hundred US patents issued, with more pending. She was awarded the Otto Schade Prize for her work in color displays, particularly PenTile subpixel rendering. In her forty year career, she has served in nearly every capacity from secretary to CEO / Chairman of the Board.

As well as writing science fiction novels, Seaby contributed a chapter to a technology textbook and a business book.